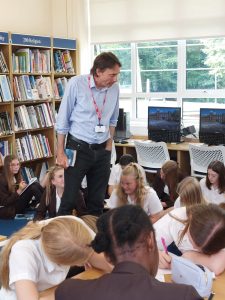 On Monday 4th July, Maidstone Grammar School for Girls welcomed author and explorer Matt Dickinson to the library. Year 8 had the opportunity to listen to his adventures about climbing to the summit of Mount Everest. He also added some amusing anecdotes about his experiences visiting various different schools. After the assembly Matt took up residence in the Library and took year 8 for a creative writing workshop. He showed them some of his books, including his trilogy The Everest Files, and explained about the writing process, how stories are conceived and how to expand a piece of creative writing. He then set the students the challenge to write their own piece of creative writing titled “If I went to Everest the thing I’d miss the most …” He asked them to include plenty of description and if possible include a story within the short piece and a rhetorical question at the end. There were lots of students writing about cats and dogs, mums and dads and brothers and sisters. Some of the pieces produced by our young writers were exceptional both engaging and detailed, here are a few examples …

If I went to Everest the thing I would miss the most is bubbles. With the freezing cold temperatures on Everst the bubbles would freeze. I love bubbles because of the way rainbows shine on them. I love the way they float in the air so lightly. I love the way the droplets splat when the bubble is popped. I love how delicate they are. It’s as if they have been waiting to explode, just sitting in the bottle. I remember when I was younger I wanted to see the glassy spheres float away into the atmosphere so much I decided to make some bubble liquid out of soap and water. I remember when, in year two, I went to the bathroom with my friends. We rubbed soap and water on our hands and blew the biggest bubbles ever. Although they never left the touch of our hands, it was still magical to see. I don’t know what I would do if the precious liquid froze. Maybe it would even explode. Would it be cool if they froze mid air? By Freya W

If I went to Everest, the thing I would miss the most would be my room. The general boxed shape would welcome me with its vertices pointing outwards, stretching out to create a vast landscape of mystery, yet I would feel secure as if I was being cradled by the blank walls that stood guard. The softening slits of sun bathing the timid tufts of melting brown carpet would be dearly missed. I would contemplate about the numerous times I lay sprawled on the floor laughing hysterically after sharing a joke with the glistening wooden door, its handle glinting with a slight hint of mischief. I could stare longingly through the portal to the looming buildings and gravel that scaled the earth knowing that the mellow flicker of light dangling from the patterned ceiling would lull me to sleep. Lastly I would miss the feeling of returning from a tiresome and tedious day and consulting with the fibres of carpet and sharing my burdens with the chilling glass. By Aaishani C 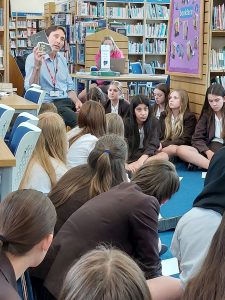 If I went to Everest, the thing I’d miss the most would be my garden. I spend nearly all my time in my garden, and I’m very proud of it. I grow orange pumpkins with short green stalks and plenty of flowers, pink, purple, blue or yellow. In the middle of my garden, there’s a wooden swing that creaks whenever you sit. A while ago, I was swinging just a bit too high, trying to touch an indigo sky, and I slipped off. I could have broken a bone, but luckily, I was only dazed. At the bottom of my garden are my chickens. They are all hens, with pretty, speckled feathers that reflect amber light. I’d miss the constant chatter, the cheery chirping that I’ve grown used to. I’d miss early mornings, pulling open the door and putting in feed whilst bathed in golden sun. I’d mi8ss late nights, spent stargazing among the plant life I’ve created. I’d miss hot summers soaring with birds upon the old swing. What’s not to miss? By Rebecca K

If I went to Mount Everest, the thing I would miss the most is Skittles. I love Skittles a lot because they taste so delicious, especially the sour ones. I have been eating Skittles since year seven so I think I have grown a bit emotionally attached to them. When I first strolled into Home Bargains I knew it was true love when I saw the heavenly sweets. There was no thought process when obtaining my first packet of Skittles, I just knew it was something I must do. Now, whenever I see the bright green or red rectangular packaging come into my eyesight, my heart swells with joy. I think that if I took Skittles to Mount Everest they would explode because of their soft and airy inside, and I couldn’t bear to see the love of my life die in front of my eyes. By Aishah C

We would like to thank Matt Dickinson for giving his time to us and Accessit Library for subsidising this event for the school. Lots was learned by both students and staff.

This event was organised by the Library and English Department.