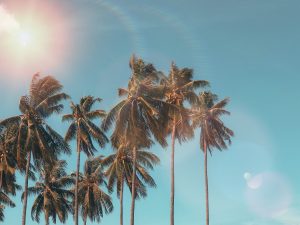 During term 6, the Creative writing club ran a writing task on the theme of Summer. Here is the winning piece from this term. If you would like to get involved next year we will be relaunching the club. Happy Summer Holidays!

Feet deep in the sand, you sway in the sea breeze like bunting. Behind you, the sun casts a spotlight on the people who have just caught a wave. Instead, you’re captivated by the azure paintbrush itself, watching as it soaks up a rainbow and sweeps it down the canvas of gold.

Notice how this wave froths at the mouth, a chihuahua desperate for a treat. While that one, behind it, looks like a shark that would devour the puppy whole, spitting out its bones as foam.

A surfer comes into your line of vision, focused, taming a bull. It writhes and bucks and struggles until the man flies clean off his board, absorbed by the water. He coughs and splutters as the wave pushes him down, chews him up, and then regurgitates his battered body. For him, that’s the moment he flees, a cowboy for the last time.

Seaweed crawls up your legs as you advance deeper, looping around your ankles like slime. It pulls on you, trying to submerge you and take you itself to the gates of hell. The sun becomes vicious, glaring into your eyes, scorching you. There is no choice but to stay here.

An arc of blue quickens its pace and advances into your vision. You turn around to take your stance, watching as hundreds of others reveal their colourful boards to form a counterattack. Salt crawls up your tongue and drips from your forehead. Venom seeps from the monster of a wave as you inhale.

Your jaw clenches as you squeeze your eyelids shut. The sea attacks back, spitting on you, resenting the weight. Rest your hand on its blue back, notice how it frisks like a feral horse. You clutch your board, gripping the wave’s reins tighter as it whines, then whinnies as you feel yourself glide as it gallops down the hot sand.

Notice how confetti sweeps down the beach. You’re flying, spreading your wings like a dove, untouchable by what lurks underneath. Instead of your life flashing in front of your eyes, it’s the scenery that you glimpse.

Those glimpses become vivid: you hear the squeals of children, see the sunlight reflect off of their smiles. An inflatable beach ball bounces in the distance, a game of cricket unfolds to your right, a city made of sand comes closer into your view. The water caresses your body, warm like a duvet. Your laughter finally ceases and, with a whistle, the breeze rustles your hair and kisses your cheek as you part with the wave. The azure paintbrush has painted another masterpiece with you, so,