Emielia S and Louise S in Year 7 were selected as winners for the YOUR Crystal Palace writing competition, imagining what they would show if the Crystal Palace rose again!

In honour of their creativity and achievement their story is on display at both The Crystal Palace Museum until the end of January and at Upper Norwood Library Hub until Christmas.

On Tuesday, 30th November they attended a special award ceremony at The Crystal Palace Museum with the other 7 winners to unveil the exhibition and to share their stories.  The Museum guide Richard Watkins told them about the Palace and the fateful fire that destroyed the palace exactly 85 years ago that very night.  At the Museum their stories are being displayed alongside artefacts from the palace including the helmet of one of the firefighters who fought the blaze.  Well done Emielia and Louise! 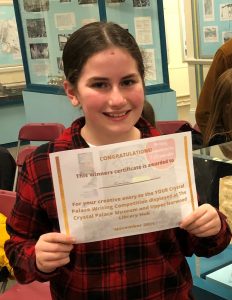 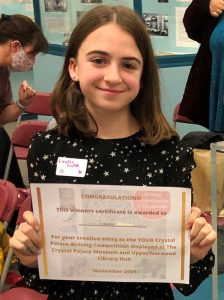 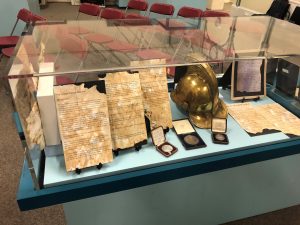